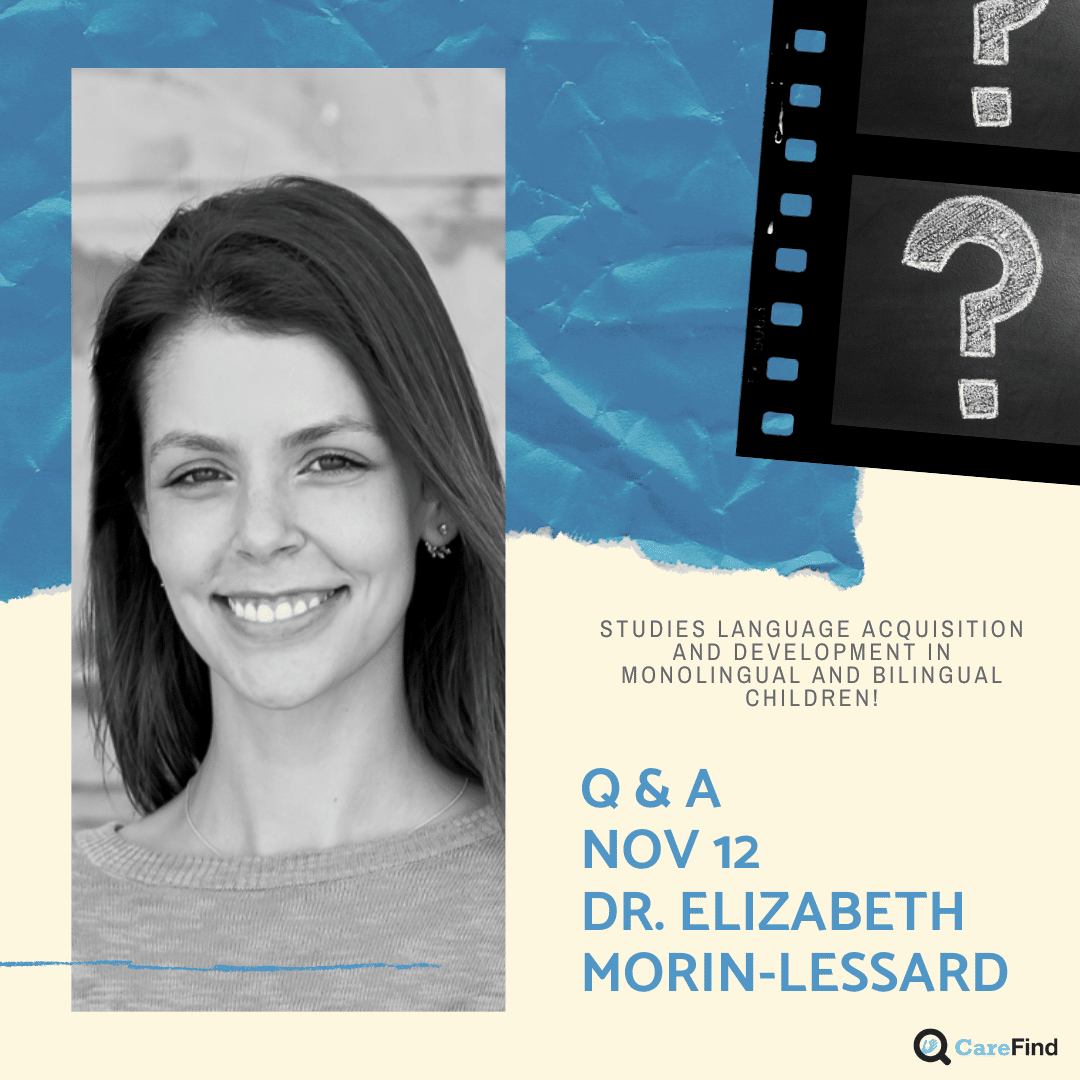 Q & A with Dr. Elizabeth Morin-Lessard

Much of the world’s population speaks two or more languages. Beyond the obvious advantage of being able to communicate in more than one language, bilingualism can be beneficial for children’s language and cognitive development. Because of the benefits enjoyed by bilinguals, parents wishing to raise bilingual children want to know how to best support and promote their child’s bilingual language acquisition.

Below are three questions on child bilingualism that have been submitted by parents via CareFind. For each question submitted, I first give a short answer, followed by a more detailed response.

Thank you for submitting your questions!

The daddy and I are anglophones. We have been using the Duolingo app to learn French. We have a 5-month-old girl that we fully intend to send to French Immersion. For her baby shower we asked for French Children’s books- and I must admit they are over my capabilities 🙁

Maybe having our daughter hear me attempting the words is better than nothing.

So my question is this: Would listening to a francophone that’s not me (listen to YouTube or French cartoons in the background), be better for developing her French abilities then my stumbling and fumbling?

The longer version of my answer to your question has three parts:

If the francophone in question is a fluent French speaker, then the quality and “nativeness” of the French that your child would hear from that speaker would be preferred over the French of someone who is not proficient in that language. This is assuming that the French speaker would have quality interactions with your child, for example by speaking to your child in dynamic, face-to-face interactions. Hearing French from a variety of people who are proficient in that language (for example grandparents, your friends) could help your child learn the language.

However, even hearing French from a native speaker may not be conducive to language learning if the language comes from videos or television in the background. Compared to face-to-face interactions, television watching may not be sufficient for your child to acquire the language. Although television may not be an optimal way for children to learn language, watching language programs in French with your child may be more conducive to learning than playing them in the background.

What is the best age to start teaching a child a second language?

Short Answer: Most bilingualism and second language researchers would agree that the answer is: The earlier the better!

It is never too late to learn a second language, or to become bilingual. However, there is generally a decline in individuals’ ability to learn a language as they age. Moreover, many adults lead busy lives, and may simply not have the time or motivation required to learn a language compared to children.

That being said, it is not enough to only expose children to a second language early on: Continuous and rich language exposure is important, to give children plenty of opportunities to hear and practice their two languages.

As a parent, I don’t speak English well as Spanish is my first language. How do I best support my child’s learning needs?

Short Answer: For a child to acquire language, being exposed to a rich language environment is crucial. Again, think: High-quality, high-quantity language interactions.

A rich environment can include, for example: Hearing lots language, from a variety of different speakers, in stimulating in-person interactions.

As a native Spanish speaker, you are a source of rich Spanish language input, which can positively influence your child’s language and cognitive development. You have the opportunity to provide quality language interactions in Spanish to your child at home, which is a great way for your child to learn Spanish.

For non-native English speakers who want their child to also learn English, it all depends of your level of comfort in that language. If you don’t speak English well, and are more comfortable speaking to your child in Spanish, you can look for other ways to support your child’s bilingual language development. For example, you could seek opportunities for your child to hear and speak the language with many different individuals. Again, this could be done by enrolling your child in after-school language programs, or regular classes offered in the community. Speaking Spanish at home and having your child exposed to the community language of English could be a good strategy to support your child’s bilingualism, particularly if they are going to attend school in English.

Some of you wishing to raise a bilingual child may still have many more questions, and it’s important that your questions get answered.

For other frequently-asked questions on child bilingualism, I highly recommend this published article. The document is based on research, and answers some of parents’ most frequent questions about how to best support their child’s bilingual language development.